Turnbull, Bowery and McKirdy among nominees for FLW Fans League Two Player of the Month 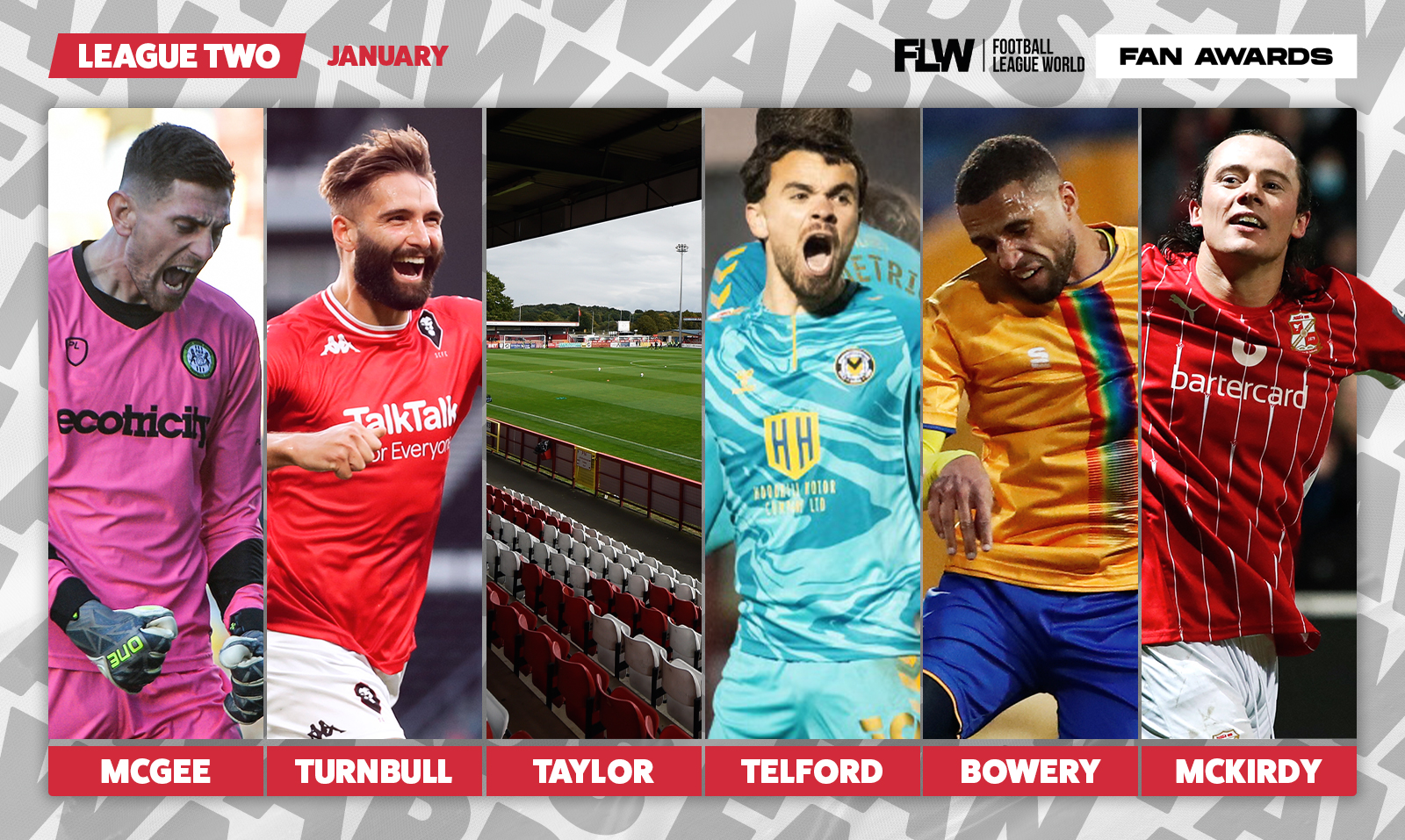 If the first month of it is anything to go by, 2022 could be a fantastic year in League Two.

There was plenty of excitement on the pitch to match the transfer speculation off it and six of the division’s standout players have been nominated for the FLW Fans’ League Two Player of the Month award for January.

The vote is now open and closes at 9am tomorrow, with the winner announced at 10.30am.

To help you decide who deserves your vote, we’ve broken down why each player has made the shortlist.

Forest Green Rovers moved one step closer to the League Two title in January as they went unbeaten and took 16 points from six games.

There has been lots of talk about the plethora of attacking talent at the South West club this season but it was goalkeeper Luke McGee that stood out – making a remarkable 19 saves and keeping five clean sheets while conceding just once all month.

January was an up and down month for Salford City but through it all centre-back Jordan Turnbull continued to provide defensive heroics.

Turnbull won a mammoth 52 aerial duels and made a ridiculous 67 clearances as he helped his side earn 10 points that keep them in the running for the play-offs as we close in on the business end of the 2021/22 campaign.

Jake Taylor was the driving force in Stevenage’s midfield in January as they turned their fortunes around last month after a difficult finish to 2021.

Taylor’s influence from the centre of the park was vital, particularly in wins against Harrogate Town, Crawley Town, and Walsall, and he showed his quality in the final third – scoring three times and providing an assist.

Mansfield Town’s maintained a perfect record in January – winning four in four as they continued the ridiculous form with which they ended 2021.

Since the turn of the year, no player has been more important to their success than Jordan Bowery, who contributed to a goal in every single game last month – finishing with three goals and two assists.

It’s been a remarkable month for Swindon Town forward Harry McKirdy, who has scored six times and added an assist in League Two as he’s helped the Robins continue their play-off push.

McKirdy produced arguably the performance of the season so far on New Year’s Day as he found the net four times in the 5-2 win against Northampton Town – and is unlikely to forget his goal against Pep Guardiola’s Manchester City in the FA Cup.

Dom Telford was back to his lethal best in front of goal last month – scoring six times as Newport County surged up the table by taking 13 points from a possible 18.

The 25-year-old now has 20 for the season but is showing no signs of slowing down and has showcased his qualities as a creator as well, with seven key passes.