Keane, Darling and Grimmer among nominees for FLW Fans’ League One player of the month award 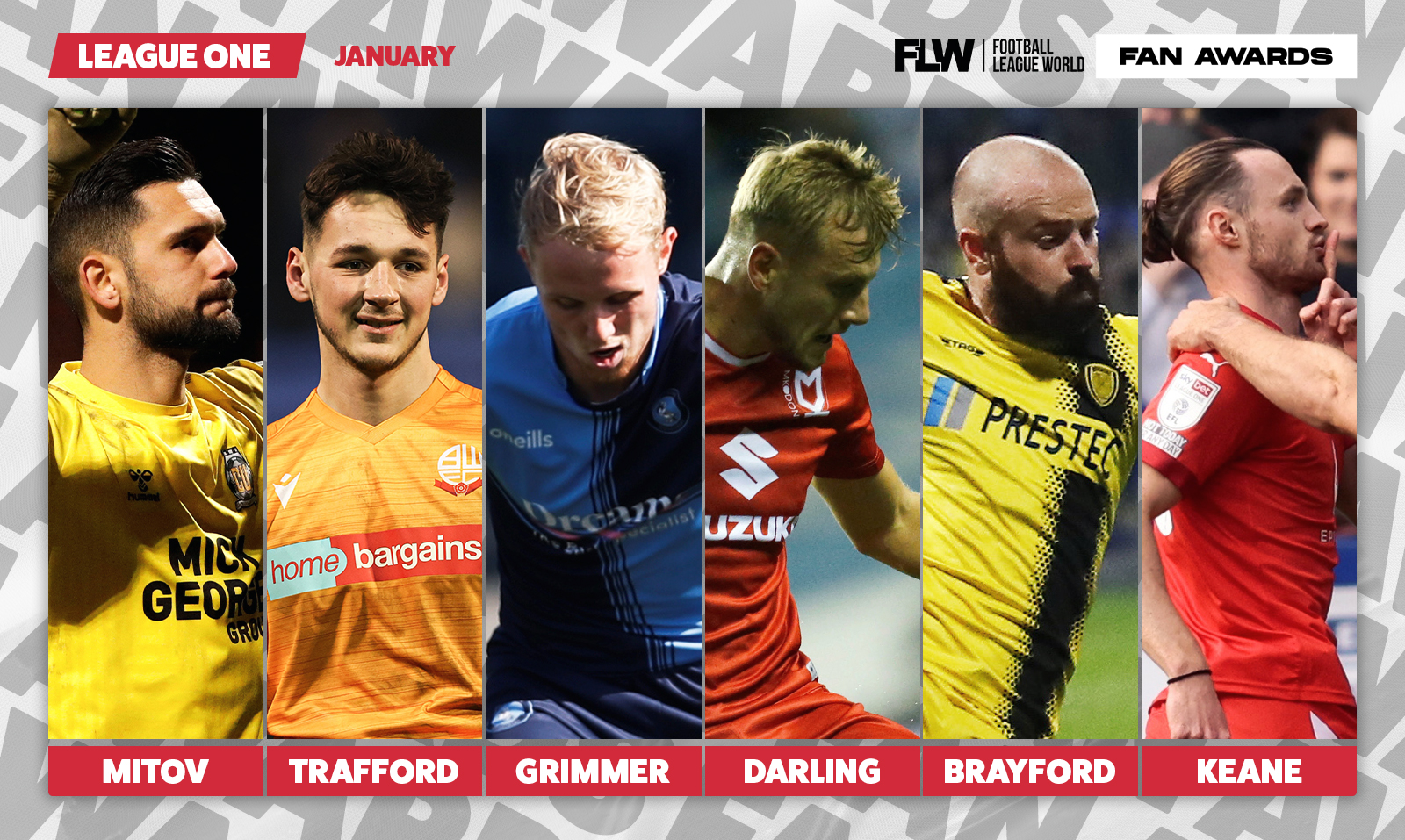 The January transfer window has come to a close and the focus swiftly returns to the action on the pitch.

But before we get stuck into February, it’s always important to reflect and here we’re taking a look at some of the best players in League One in January.

Six of the best third-tier players have been named on the shortlist for the FLW Fans’ League One Player of the Month award for January.

The vote is now open and runs until 9am tomorrow, with the winner announced an hour and a half later – CAST YOUR VOTE HERE!

Before you have your say, we’ve broken down why each nominee has earned their place on the shortlist and deserves your vote. All stats courtesy of Whoscored.

The 25-year-old Bulgarian goalkeeper has been a standout figure for Mark Bonner’s Cambridge United during the month of January.

Mitov has made 18 saves and has recorded three clean-sheets as the U’s enjoyed a fruitful January in which they climbed the League One table and separated themselves further away from the relegation zone.

Cambridge went unbeaten in January and Mitov was a key component in their run of form, he’s well worthy of a nomination.

James Trafford has seized the number one spot from Joel Dixon at Bolton Wanderers and he’s quite simply not looked back.

It’s quite clear to see why Trafford is on the books of Manchester City given his recent performances in between the sticks for Ian Evatt’s men.

The 19-year-old has conceded zero goals in his appearances in January whilst also managed to provide an assist in Wanderers’ 6-0 thrashing of Sunderland.

Grimmer has been a mainstay in the Chairboys’ XI this season and he continued his impressive form during the month of January.

The 28-year-old defender aided Wycombe to three clean sheets as Gareth Ainsworth’s side look to launch a genuine push for automatic promotion and an immediate return to the Championship.

Grimmer also managed to notch two goals during the month of January and is proving to be an invaluable component of the Chairboys’ side.

The 22-year-old centre-back is certainly emerging as one of League One’s most exciting centre-backs and he looked at his best during the month of January.

Darling helped his MK Dons record three clean sheets whilst also recording seven successful tackles  in January as Liam Manning’s side flirt with the play-off spots in League One.

Darling did attract interest from suitors higher up the footballing pyramid in January given his current ability and potential, but he’s remained at Stadium MK and will be a big part of their second half of the season.

The veteran defender has defied his age and continued to flourish in the EFL, enjoying a fantastic January with the Brewers.

The 34-year-old recorded one goal and two assists and helped Jimmy Floyd-Hasselbaink’s side remain in the top half of the table, free from the threat of relegation.

Burton Albion lost only once during the month of January with Brayford’s experience and nous proving to be pivotal.

Leam Richardson’s Wigan Athletic are on the march this season and enjoyed a fine January, going the whole month unbeaten.

A large part of the Latics’ success has come from Will Keane’s prowess in front of goal, with the former Manchester United man scoring four goals for Wigan during the month of January.

Keane has proven to be a constant menace up-front for the Latics with him also recording 14 shots during the month. If Richardson’s side want promotion this term, the goals of Keane could prove crucial during the business end.