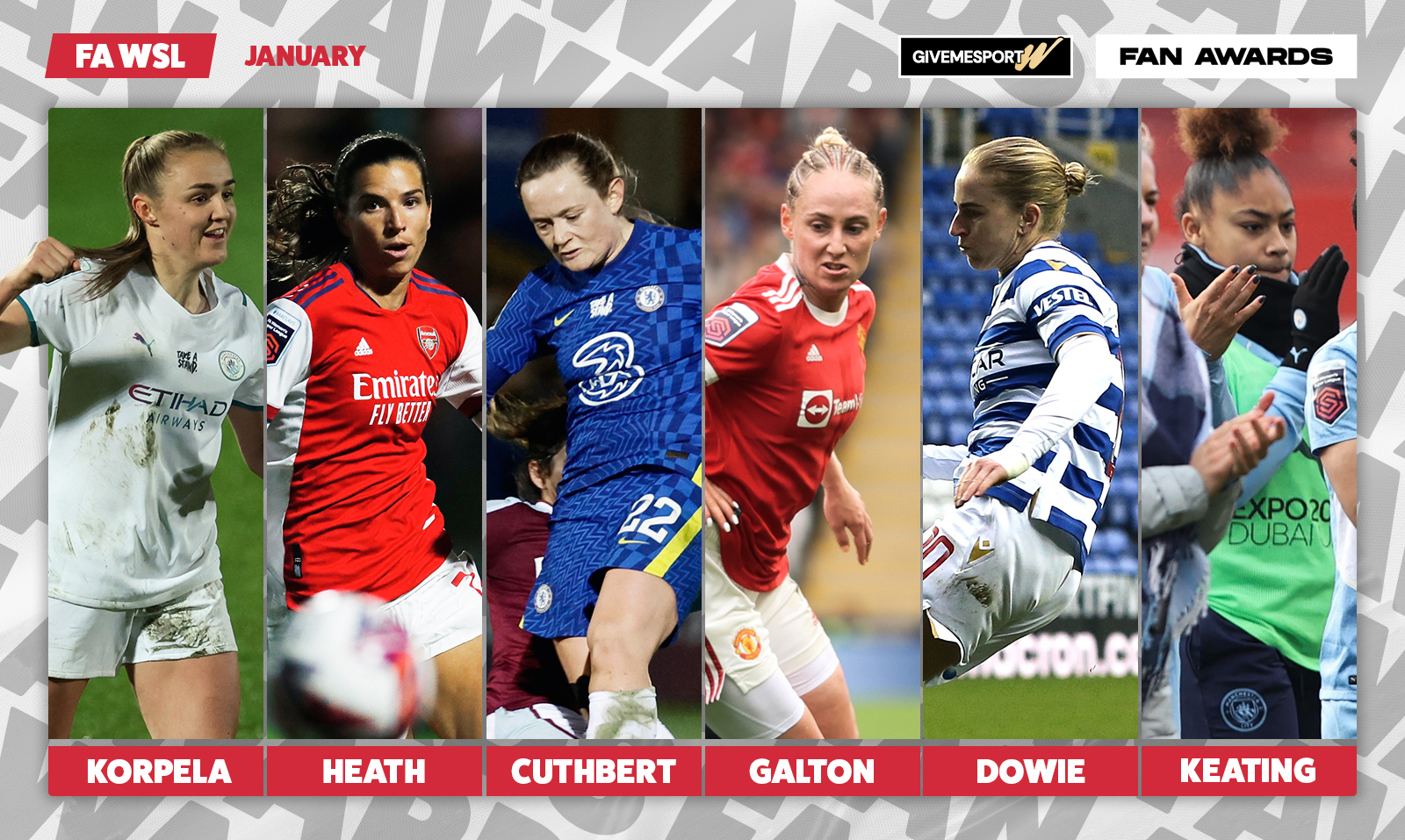 The new year kicked off with a bang in the Women’s Super League as leaders Arsenal suffered a shock 2-0 defeat to Birmingham.

While the Gunners still sit top of the WSL right now, this season has already proven that every team in the division is capable of picking up results.

As ever, there were a number of standout individual performers across January and you now have the chance to vote for your GMS Fans’ Player of the Month here

Check out our six standout players below:

Georgia Stanway has been a vital figure in City’s side this season and has shown her versatility by operating in several positions.

Recently, the English star has played further forwards and been in red hot scoring form for Gareth Taylor’s side.

Stanway scored three goals in three games as City went unbeaten in January. The 23-year-old now has 10 goals in all competitions this season and looks set to add plenty more to that tally.

United won both their league games in January in dominant fashion –– scoring eight goals and conceding none.

Leah Galton was often the focal point of this attacking success, notching two goals against Birmingham and one against Spurs.

Galton has been at United ever since the club was formed in 2018 and has often gone under the radar, given the other attacking talent the Red Devils have had at their disposal over the years.

But the 27-year-old has proven herself to be one of United’s most consistent performers this campaign and an England call-up may not be too far away.

It was a surprise to many when Arsenal announced the signing of US star Tobin Heath last summer and with a plethora of attacking options, the forward has had few opportunities to impress.

The 33-year-old made a crucial impact against Man City, however, scoring a 92nd-minute equaliser to salvage what could prove to be a title-deciding point.

Arsenal have struggled for goals of late, scoring just four times in their last five games, so Heath could well start to feature more regularly.

Natasha Dowie has been a phenomenal signing for Reading since joining this season.

The 33-year-old has bags of experience and has played for multiple English clubs in the past, including Charlton, Everton and Liverpool.

Dowie also had spells in the USA, Australia and most recently with Milan in Italy.

Since joining the Royals, Dowie has scored five league goals –– two of which came in January as Reading won both their games to move up to sixth in the table.

Erin Cuthbert is another player who is capable of playing in multiple positions and the Scotland international has been used in defence by Emma Hayes of late.

Chelsea kept clean sheets in both their January fixtures and Cuthbert also scored the second goal in the Blues’ 2-0 win over West Ham.

Still only 23-years-old, Cuthbert is nearing 150 appearances for Chelsea and is approaching 50 caps for Scotland as well.

While Ellie Roebuck was out injured, City were forced to use multiple different keepers in her absence.

Teenager Khiara Keating was the latest to get the chance and the 17-year-old has performed brilliantly since being given the gloves.

Keating kept a clean-sheet on her WSL debut against Aston Villa and made some vital stops against Arsenal a week later.

Roebuck is back from injury now and played in City’s 8-0 FA Cup win against Nottingham Forest, but Keating has done more than enough to show she is certainly one to watch in the future.