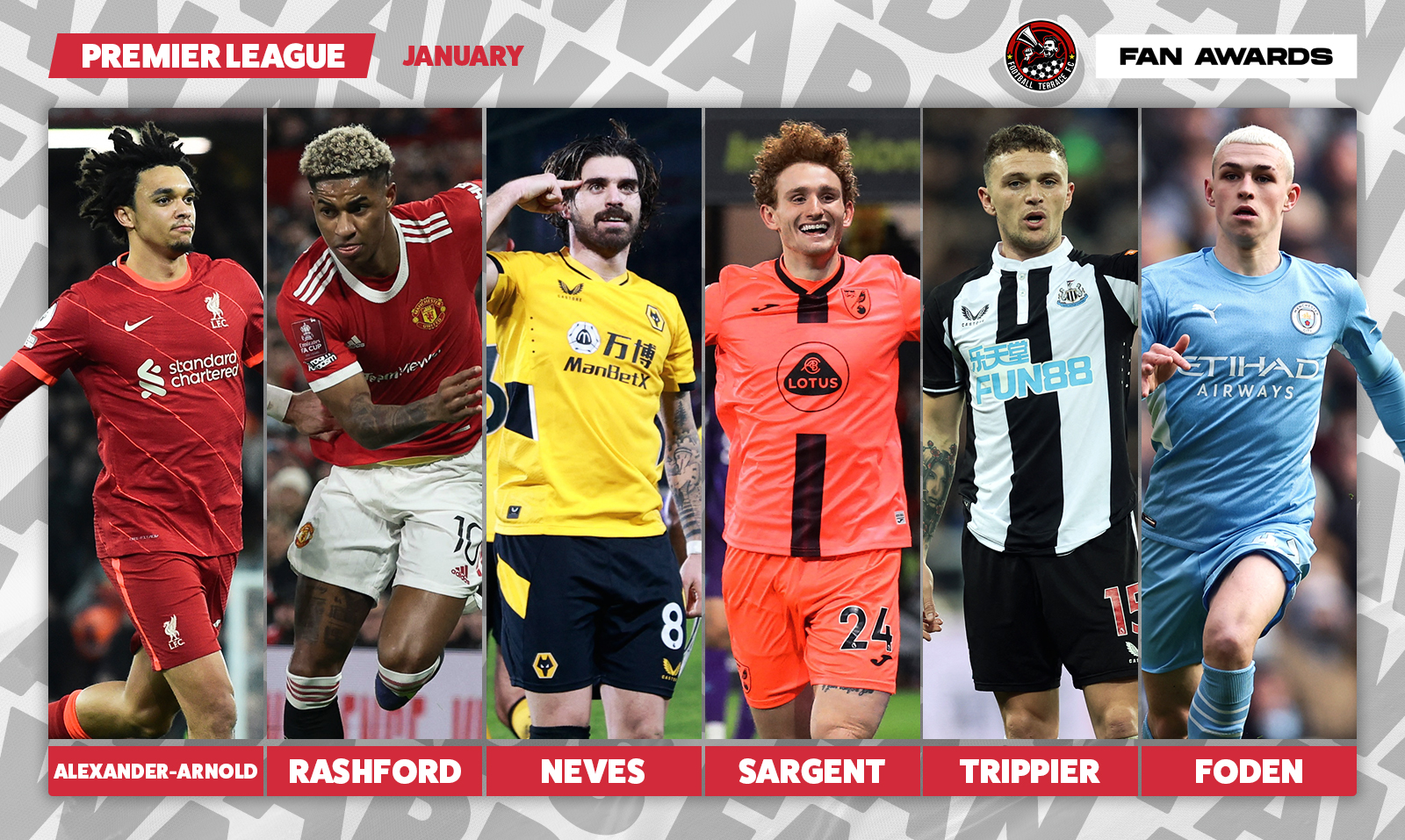 As January draws to a close, so does a great month of Premier League action that saw movements all around the table.

Manchester carved out a very handy lead but Liverpool, lurking some distance behind, managed to shrink that gap ever so slightly in the final round of that month.

With that being said it’s once again time to choose the Premier League Player of the Month, courtesy of Terry Flewers at The Football Terrace.

After a rejuvenation in play, the pressure was on for the Canaries to beat fellow relegation contenders Watford.

The first of which being an unbelievable back-heel to the top right of the keeper and the second a flying header from a long cross, ultimately a brace that helped Norwich climb out of the relegation zone.

After winning the La liga title with Atletico Madrid, Kieran Trippier was bound for success when being among the big investments at Newcastle United.

While the Magpies have struggled towards the back end of the table, a win and a clean sheet against Leeds has helped improve their chances and the defensive capabilities of Trippier in the right back position boasts impressive stats.

It’s been a great January for Wolves’ fans with The Wanderers winning every game they have played this month.

Names such as Moutinho and Traore always being among the rankings could be nominated, but Ruben Neves has been our standout performer.

The midfielder has been decisive in switching the play to attack and bagged himself the winning goal against Brentford.

It seems United’s number 10 has a legacy bigger than football nowadays, but Marcus Rashford continues to prove that he is a world class talent, claiming two goals this month, Rashford has been a key finisher, pushing United into a Europa league position.

A driven goal against Brentford assisted by Scott McTominay and breaking the stalemate against West Ham with a beautiful tap-in finish, only leaving it until the 93rd minute. Classic United.

Manchester City have been dominant in the first half of the season, this continued into January with the help of English talent Phil Foden.

While he hasn’t been at the forefront of the attack this month, his technical ability in midfield has allowed Man City to control the game in terms of possession and attacking force, perhaps unsung Foden’s skill was key when keeping a clean sheet against challengers Chelsea.

Playing as a right-back, Alexander-Arnold has the ability to switch the play forwards when an attack is emerging.

He continually makes effortless passes to the front attacking players such as Sadio Mane or Mohamed Salah who can finish with devastating results.

Highlighted in his first assist for Liverpool a long cross that eventually resulted in a 3-0 win over Bournemouth. Now, hes molded himself into a key player in Liverpool’s title winning structure

Vote for your Premier League Player of the Month here