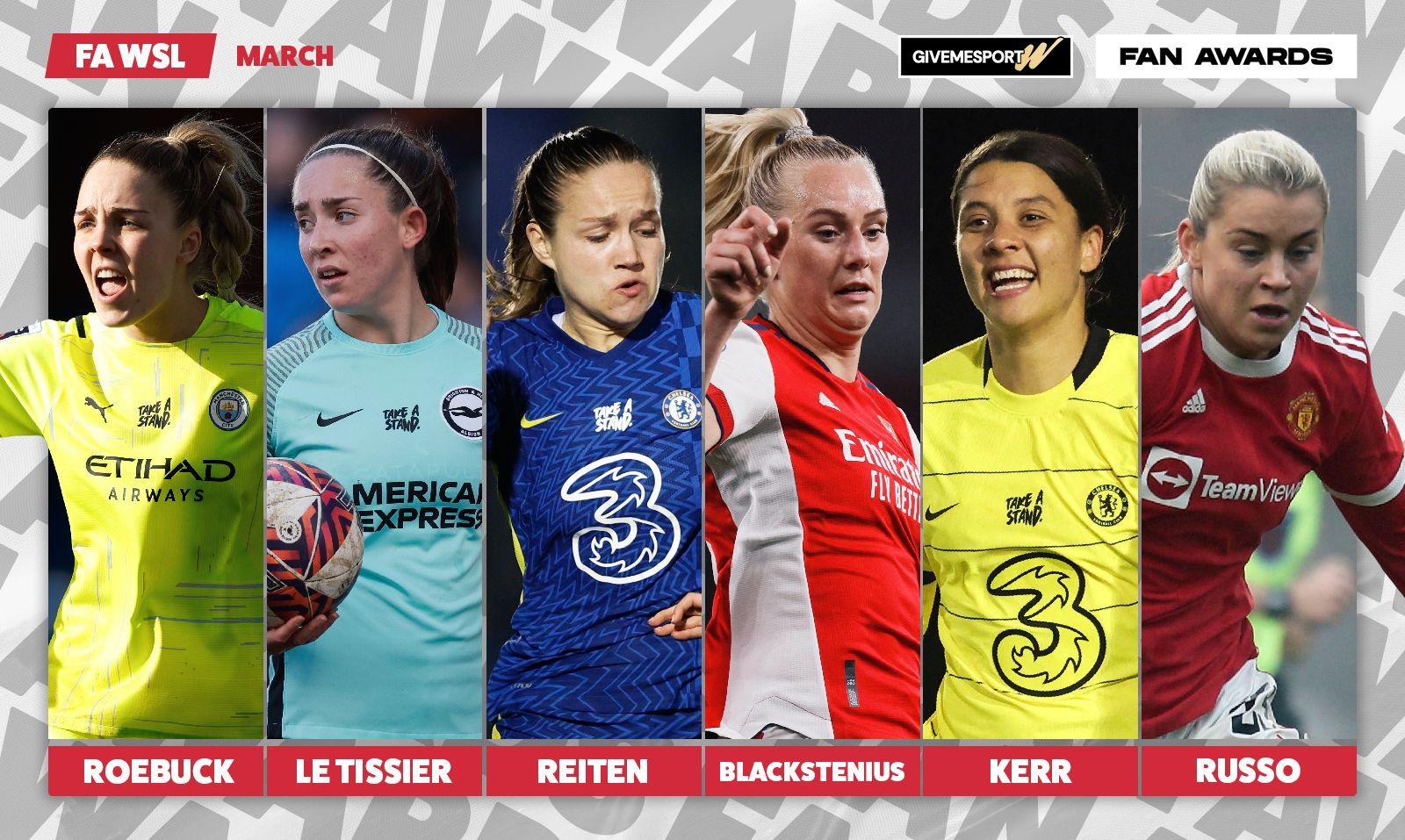 It was goals galore in the Women’s Super League in March as Chelsea leapfrogged Arsenal at the top of the table.

The Gunners had topped the standings for the majority of the season but Emma Hayes’ side made use of their game in hand by thrashing Leicester 9-0 –– moving one point clear of their London rivals.

Here are the six standout individual performers from March:

After a torrid start to the season, Man City have transformed their fortunes of late –– losing just one match so far in 2022.

The return of Roebuck has been a huge factor in this success and the 22-year-old kept clean sheets in all three games in March.

While the English keeper didn’t necessarily have too much to do during these matches, her commanding presence has no doubt heightened confidence in the City team.

It’s hard to believe Le Tissier is still only 19, especially considering she’s already made more than 50 appearances for the Seagulls.

The teenager has been a vital figure for Brighton this season and scored the winner away at Aston Villa earlier this month.

Reiten struggled for starts under Emma Hayes last season but has been a revelation in recent months –– operating in multiple positions and chipping in with a number of goals.

In March, the Norwegian scored three times, including a double against Leicester and another against Everton.

The 27-year-old has always had goals in her repertoire, having been the Toppserien’s leading scorer in 2019 but now she’s finally starting to prove it in England.

Arsenal have a plethora of attacking options but Blacktenius has become a regular starter since joining the club in January.

Jonas Eidevall is clearly a big fan of the Swedish forward and she has hit the ground running since arriving in England.

The 26-year-old scored three goals in March, courtesy of a double against Brighton and a late strike against Reading.

Kerr finished as last season’s Golden Boot winner and on current evidence, she’s set to do so again.

The Australian scored five times in March, taking her tally for this campaign to 14 –– four clear of Arsenal’s Vivianne Miedema in second place.

Her 92nd-minute strike against Aston Villa was the most important of the lot as the Blues secured a vital 1-0 win to ensure the league remains in their hands.

Russo has been in outstanding form this season and her performances deservedly led to multiple appearances for the Lionesses in the Arnold Clark Cup.

The English striker notched four goals for Man United in March, two of which came at Old Trafford, where the Red Devils beat Everton 3-1.

That took her season tally to nine, behind only Kerr and Miedema. Given United and City are separated by just goal difference at the moment, Marc Skinner will be hoping Russo can keep up her impressive scoring form.