Brown, Diamond & Roberts among nominees for FLW Fans’ League Two Player of the Month for February 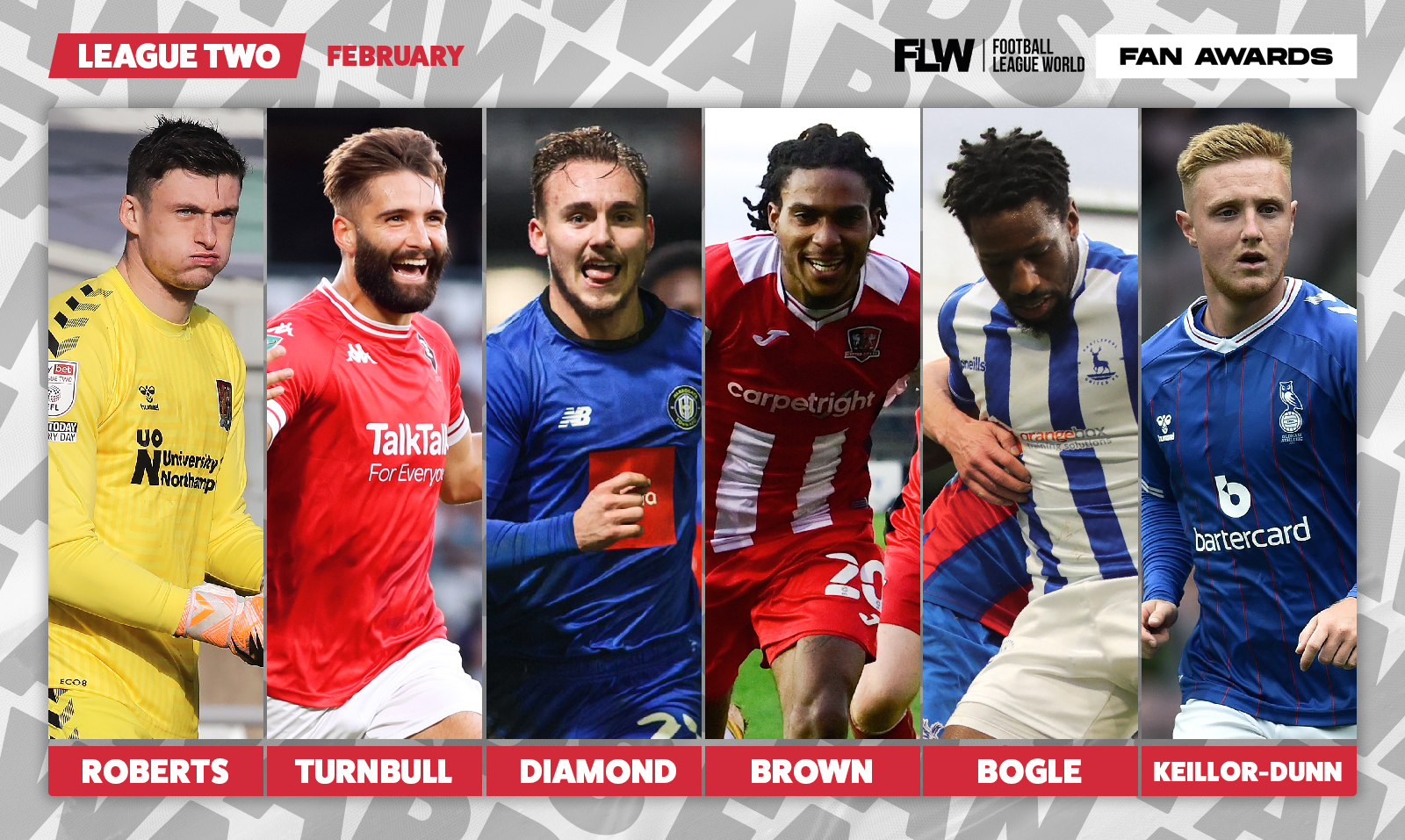 February was a very busy month in League Two, with teams up and down the table looking to build momentum as the business end of the 2021/22 campaign approaches.

Six players stood out in the fourth tier and have earned themselves a place on the shortlist for the FLW Fans’ League Two Player of the Month award.

The vote is now open and runs until 9am tomorrow so to help you choose how to cast yours, we’ve broken down why each of the six nominees deserve to win.

February was some month for Northampton Town goalkeeper Liam Roberts, who kept five clean sheets and conceded just two goals in seven games to help the Cobblers keep their promotion push on track.

The shot-stopper was kept busy throughout – making 21 saves and playing a vital role as a number of their results came in tight games.

Another month, another FLW Fans’ Player of the Month nomination for Salford City centre-back Jordan Turnbull.

The Accies went unbeaten in February and conceded just two goals throughout, thanks in no small part to the defender’s impressive contributions.

Having been recalled by Sunderland earlier in the month, Jack Diamond rejoined Harrogate Town late in the January window and picked up where he’d left off in League Two.

The wide player’s contributions were impossible to ignore in February as he scored four times and provided two assists in seven games.

The 22-year-old looks to have a bright future and Harrogate certainly benefitted from his talent last month.

Davis Keillor-Dunn was Oldham’s key man as they went unbeaten in a month that could prove the difference between staying up and going down when 2021/22 is done.

The playmaker scored five times for the Latics and provided four key passes.

Omar Bogle has proven a phenomenal signing for Hartlepool United, having joined the League Two club on a free transfer from Doncaster Rovers on the 27th of January.

The striker had a near-instant impact and was a key part of why Graeme Lee’s side were able to take 13 points from six games last month.

Bogle scored four times during that run and provided four key passes as his understanding with his new teammates developed.

No side in League Two won more points in February than Exeter City, who took 13 from five games, and it was Jevani Brown that impressed most for the Grecians.

The forward was too much for opposing defences to deal with – scoring four times and providing two assists as he helped Exeter strengthen their promotion credentials.